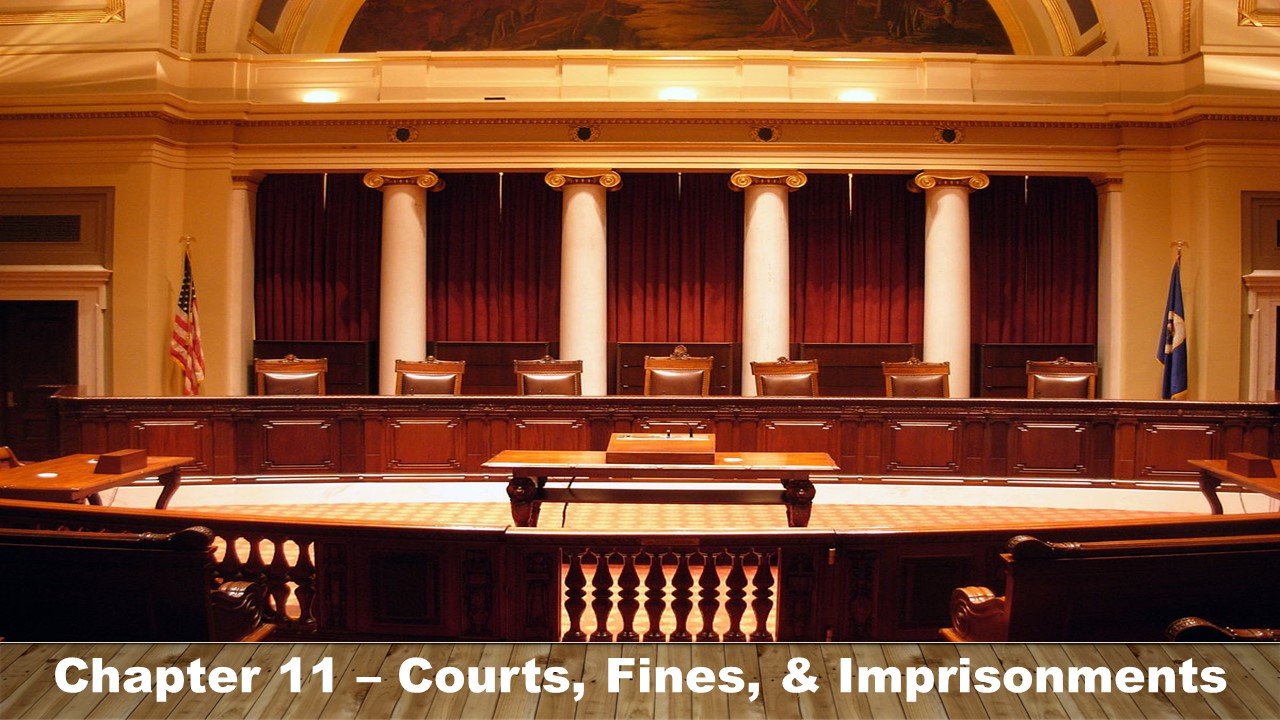 The municipal judge is hereby empowered to issue peace bonds in accordance with the procedure in chapter 29-02 of the North Dakota Century Code. (Ord. No. 477, § 1.)

Section 11.04.020       Judgements based on violations not originally charged

In all actions and proceedings brought and heard in the municipal court for violations of a provision of this Code or other city ordinance or the enforcement and recovery of any penalty provided for violation thereof when it shall appear from the evidence that another provision or ordinance of the city other than that charged to have been violated has been violated, the court shall have power and authority to find and adjudge the defendant guilty of the violation of such other ordinance; provided, that upon demand of the defendant so to do, a new complaint shall be made and filed charging the defendant with such violation, and the proceeding thereunder shall be had in manner and form as by law provided in cases otherwise instituted in such court. Such new complaint shall be made and filed by the chief of police when so directed by the municipal judge. (Ord. No. 489.)

The municipal judge shall not be permitted to receive fees of any kind or in any amount, nor shall he be entitled to receive any payments of any kind for his service other than the salary as provided above. (Code 1958, § 10-3; Ord. No. 455, § 10-3.)

The municipal judge shall be in attendance at municipal court for the transaction of business that may come before him and shall devote the time necessary to handle and dispose of the business coming before him. (Ord. No. 455, § 10-5.)

The municipal judge may, in his discretion concerning suspended sentences and upon application or its own motion concerning deferred imposition of sentences, upon the conviction of any person of any offense against this Code or other ordinances of the city then and there impose a sentence of imprisonment as may be appropriate but defer imposition of sentence or suspend the sentence imposed on such person for a period of not to exceed two years after the order imposing probation; after the defendant’s release from incarceration; or after termination of the defendant’s parole. In any case of a suspended or deferred sentence, the court shall place the defendant on probation during such term of suspension and period of deferment. The municipal judge may, during such term or period, allow the defendant to go upon his own recognizance or upon such bail as may be regulated by law or the ordinances of the city; and may, in his discretion, at or before the expiration of such term or period have the defendant brought before him and commit such defendant or cause such sentence of imprisonment to be then and there imposed and executed in like manner, so far as applicable, as may be provided by law, this Code or other ordinances of the city, in cases where the commitment and imposition of the sentence of imprisonment is not deferred or suspended and may then and there forthwith commit such defendant and require that such sentence of imprisonment be executed and carried out. (Code 1958, § 10-18; Ord. No. 455, § 10-15; Ord. No. 1024, § 1.)

Whenever in this Code or in any ordinance of the city any act is prohibited or is made or declared to be unlawful or an offense, or whenever in this Code or any ordinance the doing of any act is required or the failure to do any act is declared to be unlawful, where no specific penalty is provided therefor, any person, upon conviction for the violation of any such provision of this Code or any ordinance, shall be punished by a fine not exceeding one thousand dollars or by imprisonment not exceeding thirty days, or both such fine and imprisonment, for each such offense. Each day any violation of any provision of this Code or of any ordinance shall continue shall constitute a separate offense. In the construction and interpretation of this section, the revocation of a license or permit shall not be considered as a recovery or a penalty so as to bar any other penalty being enforced. (Code 1958, § 1-9; Ord. No. 516, § 1; Ord. No. 939, § 1; Ord. No. 1157 § 2.)

Any person upon whom any fine shall be imposed for violation of a provision of this Code or other ordinance of the city may be committed, upon the order of the court before whom the conviction is had, to the city jail until the fine and costs shall be fully paid in money or discharged by labor.

If such person is committed as provided by this section, the term of his imprisonment shall not exceed three months for any one offense. Each person so committed may be required to work for the city at such labor as his strength will permit, not exceeding ten hours in each working day, and for such work such person shall be allowed for each day, exclusive of his board, five dollars on account of the fines and costs assessed against him. (Code 1958, § 10-13; Ord. No. 455, § 10-10.)

When any person is convicted before the municipal judge for the violation of any provision of this Code or other ordinance of the city and is sentenced to imprisonment either on account of failure to pay the fine or otherwise, the municipal judge may order and sentence such offender to hard labor on the public streets of the city or any public works in the city for the full term of such imprisonment, and the sentence shall be carried into execution under the direction of the chief of police of the city. (Code 1958, § 10-14; Ord. No. 455, § 10-11.)

The president of the board of city commissioners may at any time release any person imprisoned for the violation of any provision of this Code or other ordinance of the city and shall report such release with the reason therefor to the board at its first session thereafter. (Code 1958, § 10-16; Ord. No. 455, § 10-13.)

Whenever in this Code or in any ordinance any person pleads guilty to or is convicted of violating a municipal ordinance for which the maximum penalty that may be imposed under the ordinance for the violation includes imprisonment, the municipal judge may assess a fee of not more than twenty-five dollars as part of a sentence imposed for the purpose of funding a crime victim and witness program.  The municipal judge may assess the fee when sentence is imposed or when sentence is suspended or imposition of sentence is deferred, unless the defendant is indigent and unable to pay the fee.  All fees paid to the municipal court under this section shall be deposited monthly in the city treasury for allocation by the governing body of the city to a private, non-profit domestic violence or sexual assault program or a victim and witness advocacy program of which the primary function is to provide direct service to victims of and witnesses to crime.  (Ord. No. 1174, § 1.)